Cloud "Everything As A Service" - the latest "abused by all, confuse all" phrase!

OK so there are many people abusing the word 'cloud' like crazy - sadly no new news there.

Personally I'm more aligned to the NIST definitions re cloud (http://csrc.nist.gov/groups/SNS/cloud-computing/)- now these aren't perfect, but rather a common reference point. Sadly even those are being 'interpreted' conveniently by many now...

Some of the questions I use as a litmus test for people telling me they are offering 'cloud services/technologies' is :-

Clearly there are different questions / relevance between consuming cloud services, and utilising technologies in order to provide cloud services - but I find above an interesting starting point for both. Similarly there is no defined right or wrong answer to above, but the combined answers help frame my understanding (I have a very long list of other questions but that's for another day & blog entry).
Naturally consumption of cloud services tends to have a very different financial model & aspects that need to be accounted for when comparing (but that's a subject for a much bigger blog entry). Whilst internal company recharging can alter the appearance of financials for some it doesn't for the company as a whole (other than help to drive behaviours). 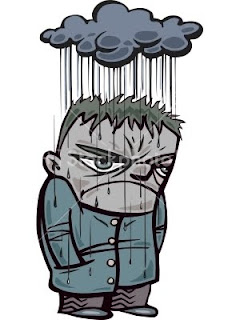 What I am getting really cheesed off with is people marketeering classic data-centre technologies as 'cloud' simply because they can be used as a component within a 'cloud service' - if I were to follow that analogy would I be able to buy 'cloud screws' from http://www.screwfix.com/?
Honestly, look its really simple, as usual quiet action & genuine cost reduction talks not hype, marketing or bluster - if you want to ride the 'cloud bubble' be clear how your technology genuinely relates to 'cloud' and in what context, or please I beg of you STHU and focus on what you're good at?
Posted by ianhf at 13:45 No comments:

So those who know me will realise I'm certainly no left wing, flower in hair, sandal wearing hippy - but I just had to write a complaint about a delivery one of our team had today from Dell.

So my colleague ordered a 14.1" privacy screen from Dell for his laptop on our internal purchasing system, guess how it was packaged for delivery :- 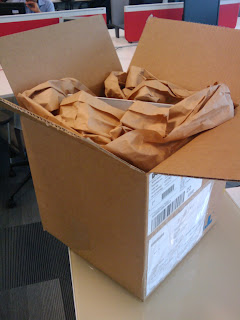 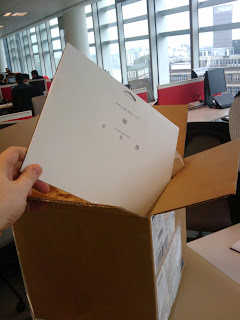 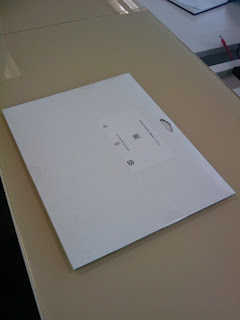 Utterly astounding! An A4 sized envelop that is featherweight somehow required a box slightly greater than 1 foot cubed in size, stuffed full of packing paper - just how many trees, polar bears & penguins were felled for this???

The final irony, despite the order being for a 14.1" Dell actually shipped a 12." filter - so the filter has to be returned in it's original packaging, now who wants to take a bet as to just how big a box Dell ship a real 14.1" filter in???

So those who know me, understand just how much I loathe FUD but here's a question I've been posed for some time, and have been asking each IT vendor I meet.

The more common silo'd IT infrastructure is (thankfully) rapidly consolidating and moving to a 'shared infrastructure' approach, with individual assets providing service to more and more concurrent application. Naturally there is a push to improve the management tools for such things (well lets face it they couldn't get much worse), to enable fewer people to manager wider logical estates, combined with a much more dynamic & agile configuration time-frame.

We hear lots about these management tools being based upon a role based access & security model (in effect domaining/sharding the size of the risk an individual can create), but :-


"How many of these tools allow for a 'peer approval required' model ('4 eyes better than 2') against certain actions?"

The request here is to be able to restrict certain destructive and/or disruptive management configuration actions to require two (or more) administrators to 'sign' the change before the system accepting & enacting the action. Thus allowing a small quantity of administrators in a company to continue to have a very wide view of the estate, but to hopefully mitigate against the risk of a lone admin actions (malicious, accidental or otherwise). The role based approach appears to either drive up the overall quantity of FTEs needed or a significant compromise of the role segregation model.

Think here about just how many SAN/LAN switch ports, LUN configurations, virtual servers or backup/recovery jobs can be impacted in 10 minutes with these centralised tools, by a lone sysadmin with legitimate password & authorisation?

Time for the technology to match the human issues and processes?
Posted by ianhf at 13:05 1 comment:

Now per as my previous blog entries show-me-money-information & tco-time-for-opensource-framework discuss, I have to make architecture & standards changes & decisions based upon tco & roi calculations. Accordingly we require vendors to be able to demonstrate to me that they understand the TCO/ROI of their products & architectures (I have my views but need to understand theirs and validate / align forecasts), and of course provide me with copies of their models & values.

Okay, so 4 months ago I renewed my simple request to EMC for a TCO model comparing DMX+CX with VMax (in essence to compare 'between box' vs 'within box' tiers). A simple enough request I thought - and one I made initially several years ago (at that time comparing DMX to DMX+CX), but never got anywhere. This time a specific project planning to purchase PB+ of capacity drove me to renew this request.

Now four months on and, despite me chasing, I still haven't received anything from EMC, nor have I even been given an estimate as to when / if I might see something. So I'm forced to conclude that Uncle Joe and the Elusive Mathematical Calculators are either: -
To me nowadays EMC are a company of conflicts, some of the things they do (& have) are the best bar none, other things sadly are the worse. As @storagebod pointed out here social-climbing that EMC are indeed changing for the positive but I suspect not as fast or thoroughly as they/we would like. Which means unltimately, despite changes, they are still a monthly/quarterly financial engineering orientated engine with a sales & target structure that 'reverts to past form' when deals are being discussed.

Now EMC aren't alone in this, to compare this with how some other companies have reacted to similar requests :-
What some companies (or parts of companies) still appear to fail to grasp is that the 1990s tactics of poorly marketing, shouting loudly, 'special for you today only' sales negotiations, 'influencing' ISVs or mngt simply won't work any more. Customers need more data & benefit forecast models nowadays in order to justify usage or purchase decisions, and I fail to believe that these models aren't used when a dev team is seeking approval to create the product in the first place! I'd like to be less cynical or disappointed, but without the information to support the claims from some vendors its hard not to be...
Posted by ianhf at 13:00 7 comments: