Feature stacks and the abuse of language


So the new financial year heralds the season of vendor conferences, and - as night follows day - over the horizon, like the four riders of the apocalypse, approaches the associated marketeering storm that always comes with such conferences.

Sadly one trend I'm seeing more of from the (increasingly desperate?) IT infrastructure industry is aspirational future feature stacking. Where endless features are announced haphazardly into the mix in an attempt to justify new revenue streams; naturally the delivery of these features is in a different year/decade to when they are announced, let alone when any actual benefit might be realised.

Of course the first challenge to this is trying to convince customers re the vital importance of features they haven't heard of before, often for problems they never knew they had. So some use fictional stories in order to try and paint a picture of utopia as a result of paying for their magic liquor, some just plaster the industry with noise, others use new abuses of marketing terms, some use all.


A common area glossed over is the 'initial ingress disruption' required to achieve such utopia features - especially given the likely useful life of 'nirvana function'© versus the duration of benefits case and lifetime of said feature.

The benefit's case is an interesting point in it's own right - remember these are the vendors that often still haven't a clue about the TCO or ROI for their products several years after they were announced. Naturally there is little or no mention of the financial costs involved, ingress & egress disruption, organisation & technology process changes, operating model changes, and increasingly, the business process changes needed to use this fictional future widget function.
Now you wouldn't expect otherwise, but of course there is little mention of either the existing abilities to solve this problem other ways, or that the effort & resources might be better invested elsewhere (ie higher up) in the technology solution stack? Or that the symptom cold be avoided entirely if the cause were addressed with better application design. My view has always firmly been that infrastructure can provide at best single digit % improvements, where as changes in the application layer can provide double digit % improvements.
Always just snow-ploughing the data problem symptom around rather than addressing the cause - of course you can't fault the bottom feeding tin vendors from offering this solution, there is always some legacy application that can benefit from any improvement; but frankly the infrastructure companies don't have many other options and there is always somebody that'll buy anything.
So there's plenty of noise, lots of definition and understanding confusion & plenty of widget functions, indeed it's nothing new for companies to start abusing words and terms in a desperate hope to generate excitement and differentiation - yet normally this just further confuses the market (remember when a word typically had one clear, obvious and innocent meaning???).
Some recent history of definition & language abuse could be :-
I'd really encourage the use of the relevant standards body to help create common industry definitions for the terms used, always provide clear & transparent context and always detail the assumptions & pre-requisites with any form of benefits discussion. Rather than using hypothetical stories and definition abuse, I'd really much rather prefer it if companies explicitly list the: -
To take an example, one key element being touted by 'federation' is 'non-disruptive migration' - something I'm very much in favour of. However a) for many this can already be done through the use of the de-facto volume manager & file-systems, but b) the real issue associated with migration are 'remediation' and CABs. With most CABs nowadays been based on risk, and commonly used as process validation gates - it's hard to understand how 'federation' helps change approval boards (especially when you consider that lots of CABs still require engagement for moving hypervisor guest images). For the 'remediation tech refresh' use case of federation there will need to be a lot of changes in the vendor support & interop processes, culture, responsibilities and agreements for this to be of use. If the host still requires any material remediation (eg HBA change, firmware changes, OS patches, server model change, VM/FS changes etc) then moving the bytes stored on the rust, whilst good, does little to address the majority of the problem. Let's not forget all the other associated OSS processes that have to be engaged - eg ICMS/CMDB updates, asset & license management registers, alert & monitoring tools, networking planning & bandwidth management etc. Yes in the world of the automated dynamic data-centre these related issues will be improved, but that's a future state after a lot more of investment & disruption.

If this sounds overtly negative that isn't the intent. The issue for me is that any 'nirvana function'© is normally only of use if it makes a net positive change to the cost of BAU service or change. In order to prove that we need to understand how it impacts the steps, effort & duration for each item in the transition from 'desire to delivery' (eg when somebody thinks they may need some capacity to when they are able to actually use this). From my experience this sequence involves a mix of commercial, technical, political, emotional & financial steps - similarly very few companies seem to be able to show the steps in this sequence and how their function changes them.

Now I'm very much one for focusing on capabilities and architectures rather than point widget features, but the current trend of announcing aspirations as architectures and then products is a very dangerous and steep curve downhill. Like an iced wedding cake made from cards built on a sandy beach - this obsession with feature stacking promises everything but benefit delivery regularly lasts for only a few minutes before collapsing in an ugly mess. 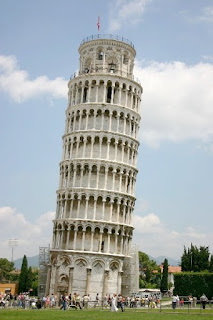 Are suppliers hoping that by increasingly frequently hyping the shiny shiny baubles of the progressively distant future they will distract us from the factual reality of today? Remember today was the future of yesterday, and how many of the past's 'nirvana functions'© promised by these same charlatans vendors actually came half way true?

If only these vendors spent time & resources making the existing features usable, simplifying the stack, resolving the interop issue, given clear context and being able to actually justify their claims, rather than building their own independent leaning towers of Pisa from which they can throw mud at each other...
Posted by ianhf at 13:00